How To Fix A Bent Basketball Rim Using A Car Jack

How To Fix A Bent Basketball Rim 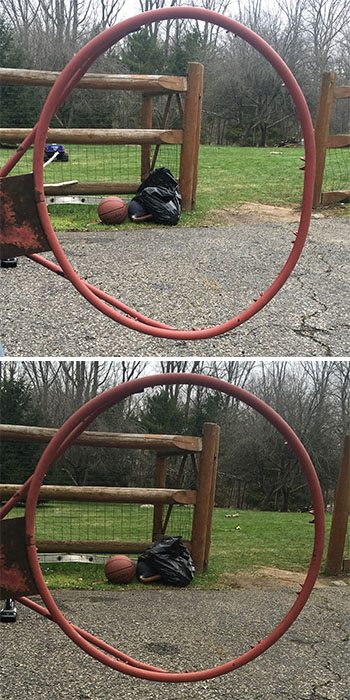 Hey everyone! So my neighbor was throwing out his old basketball hoop! I like to say FREE is better than cheap so I rolled it over to our house. I had actually been planning on buying one this spring, but instead of dropping $500 I figured let's give this a shot and see if we actually use it 😉

It was beat up, but perfectly fine to beat up some more! The only real issue was the rim was bent. Sure I could have used it as an excuse for missing perfect swishes, but the idea of how to fix it was now in my head!

I am sure if you have had a basketball hoop like this one before you know that it if is not weighed down, the wind can knock them over very easily.  When they fall over the from of the rim takes all the impact and that is where the problem of a bent rim starts!

Anyways you can see the results in the pictures, but I also made a video below to show how I did it. Gotta love the kids LOL!!

Basically I used an old car jack from my first new car which was a 2003 Dodge NEON!! Very cool and a stick! Anyways that jack has come in handy many, many times, so if you every get  chance to get one grab it. Trust me there will be a time you might need it, just like this one.

The idea was simple, just fit the jack into the rim and crank it until it starts to take the circular shape again. I needed to add some 2×4's and then add another to get it right, but I think overall it turned out perfect. I probably should have measured it since there is probably an exact distance, but hey I don't have time for that. This is better than the oval so I will take it!

Hope this gives you some ideas.

How to Fix a Basketball Rim with a Car Jack!

Well... the first race of the season is over and what an awesome race it was!! I finished the Tri-State Spartan Beast with a 4:45:58 time. I am definitely happy with that time, but of course it can always be better ;-) I'll get into my time and placement a bit more below, but first a bit about the race! Oh and if you did not know you can get the ...