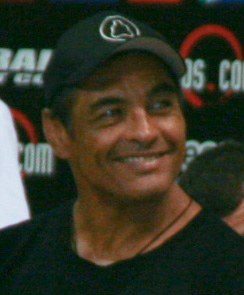 Over the years I have become a big fan of MMA, BJJ, and the UFC which really brought this all to the beast it is today. I was into it more many years ago, and something I would love to actually get involved with sometime in the future.

I had always heard the Gracie name so I looked into the family. I admired Ricksons's outlook on life, working out and diet, so figured I would put that info out here.

Rickson Gracie was born in November 1958, Brazil. He is an 8th degree black and red Gracie Jiu Jitsu, a well known form of Jiu Jitsu created by the Gracie family and inherited by the Gracie family. It is a form of Brazilian Jiu Jitsu first developed by Helio and Carlos Gracie who are well known for their contribution into the modern BJJ. Rickson Gracie started his Jiu Jitsu training when he was very young. He started competing in the age of six and by 15 he was teaching it to other people. By the age of 20, Gracie won his first ever victory against the famed Rei Zulu, a 230 pound brawler from Brazil. This earned him international fame which made him become as the top most recognized freestyle fighter.

Gracie has now retired from professional Jiu Jitsu and MMA but he still contributed his experience and knowledge to young people who want to learn Jiu Jitsu. He gives away many seminars on Jiu Jitsu trying to live his father’s legacy. He believes that Jiu Jitsu is not a tool to fight, but it is a social tool that gives confidence to those who are physically weak and want to protect themselves. He teaches people Jiu Jitsu so they can defend themselves against any form of violence.

Throughout his career, Gracie has appeared in 11 fights and has won them all. He has also been a part of a very well known documentary by Robert Goodman. The documentary followed the life of Rickson and two other popular fighters who prepared for Tokyo’s Vale Tudo in 1995. Rickson Gracie has also taken cameo roles in Hollywood movies. His most noted appearance was in ‘The Incredible Hulk’ by Marvel where he played the instructor of Bruce Banner.

The key secret behind his training is his diet. Rickson doesn’t follow a diet where he has to restrict food or eat specific stuff. He only follows the rules of digestion so he can avoid fermentation, a process that can cause digestion to produce unwanted results and cause the body to release acidic reactions that destroys the nutrition.
He has set up a group of foods he consumes carefully. Here is what Rickson Gracie follows to keep himself maintained.

The Strict Rules of Gracie Diet

According to Gracie, you must be very careful when eating two things from a different pool of foods. He shows some examples below:

So there you have it! Pretty interesting dude! I have actually seen a handful of MMA guys follow this diet pretty closely and they have had great results!

Hope you enjoyed. Leave a comment or a question below.

Got your hammer? Chisel? Canvas? Ready, set, go.... I have done Body Beast with Sagi, but never did much with Autumn, but I liked what I saw with the new Hammer & Chisel workout program, so I had to give it a shot. Quick Links To Info Section:Click To Go Direct To Section Equipment Needed My Review Total Body Hammer Workout Workout/Calendar ...