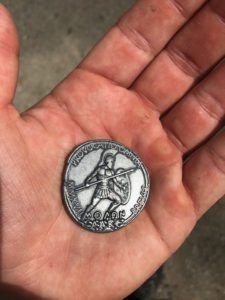 Did you know you can win a Spartan Coin? If you want to run in the World Championship Heat at Lake Tahoe then you have to win a coin!

Up until a year ago I had no clue there was such a thing until my buddy told me he thinks he might get a coin today! I was like ,”a coin”? What's that?

Sure enough my good friend Mike Bartoszek  who I met at the 2015 NJ Beast ended up winning his coin and it was pretty awesome to be there for that. He won his 2017 coin last weekend at Tuxedo as well! Congrats man! In fact I am using his pictures in this post because a coin is something I have not won… not yet at least 😉 Shout out to K Shan Performance where he trains! Awesome place https://www.kshantraining.com/

Also a shout out to Cali Schweikhart who I met at the Tuxedo Sprint a few weeks back. She won her coin that day too! Great work!

You can always click here to read what Spartan has to say, but who knows if their page will work…

Some Tips To Getting A Coin

You also have to remember that if someone has already earned a coin then they do not get another one.  So let's say the Top 5 Elite male finishers in a race already have a coin then the 6th, 7th – 10th will get coins.

So the point is don't feel like you won't ever earn one. You can also be strategic about it as well. If you know there is going to be a big race with a lot of pros, then most of them will have coins and you have a better chance at getting one even if you finished 20th. Make sense? 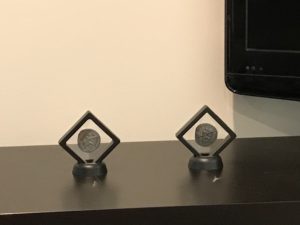 Now if you get your coin then you will be moved into a Coin Holder World Championship Heat prior to race day. If you are signed up for Elite heat at World Championships and do not have a coin you will be placed in a second elite wave. The non-coin holder wave will NOT be eligible for cashe prizes, but will get overall points towards their rankings.

So.. have you won a coin? We would love to hear about it! Let us know below!

Well if you have every done a Spartan Race then you know all about the Spear Throw. Something that seems so simple can be such a make or break obstacle even at the elite level. It has been the game changer in my final races. Just like any obstacle the issue is practice. How can you get better at a specific obstacle if you don't have access to one. ...