Hey so before I go into Oliver Queens, I mean The Hood, I mean The Green Arrow… Wait I mean Stephen Amells workout plan or roughly what he is doing I have to say this!
Start watching ARROW! I kept seeing it pop up on Netflix since I have been binge watching Daredevil, Luke Cage, The Flash etc…. For some reason I just thought The Green Arrow looked corny. I really had no clue about that character, but after I watched the first episode I was hooked! Even better Netflix has 4 season and they are currently on Season 5 now! #winning
So as of now I am a few episodes deep into season #2 and of course have noticed that Stephen Amell is pretty JACKED! I was curious what he was doing for his workouts and how much stunt work he was doing. He rocks the salmon ladder in his lair and handfuls of other body weight type exercises. 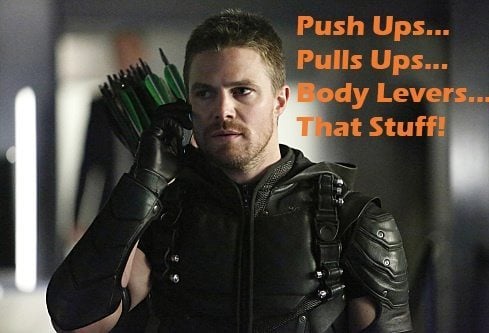 The Video That Really Impressed Me

Just Listen To Stephen Amell & He Will Set You Straight

Main Points About His Working Out & Fitness:

I mentioned this early about functional strength and this is exactly what he mentions. He says he is more impressed with someone who can do 30 pull ups rather than bench 300 lbs because one has an application in the real world! Well said.

Here is a quick cheat sheet of what he does in the video above.

What If I Can't Do Pull Ups

Testing Out Some New Food

OK so with the new year I wanted to try and start eating healthier! Of course.... new years resolutions and all that stuff. We should really be striving for a change in our lifestyle and not just a new years resolution type thing, but you need to start somewhere right? So normally I will eat pretty much the same thing when I start to clean up my ...