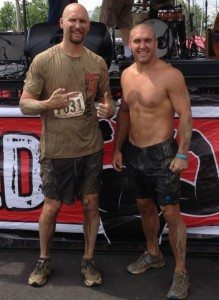 Last year after we ran the Super Spartan we were pretty excited to get signed up for some races in 2013. One we found was the Rugged Maniac a 5k obstacle race that took place at Raceway Park in Englishtown, NJ.

Myself, Ken, and Kens buddy Brian ended up participating in the 9:30 AM heat on Saturday!

As far as race prep I was not too worried about nutrition and hydration as much as I am this year for the 8+Mile Spartan on Sept 7th. With that said I made sure I got a good nights sleep, woke up and had a Chocolate Shakeology, with 1 banana, 1 scoop of almond butter, ice, and water. About 8:00 I had a cliff bar and then at about 9:00 I was still a bit hungry so I had another half of a cliff bar. I also used something called Pump HD that was a free sample from GNC. Last year at Spartan I took something called C4 Pre-Workout Drink and I have to say I think the C4 was better….

Anyways onto the race…

Watch the video at bottom of page for the quick 1 minute guide to what you need to be an Emerald Coach. Basically Emerald Coach is the first rank you will reach in the Beachbody organization and it is a very important one. Not only can you earn money on team cycle volume you can also get FREE customers from Beachbody! How to Become an Emerald ...