DIY Spartan Rope Rig Hang - I Built My Own Sort Of... 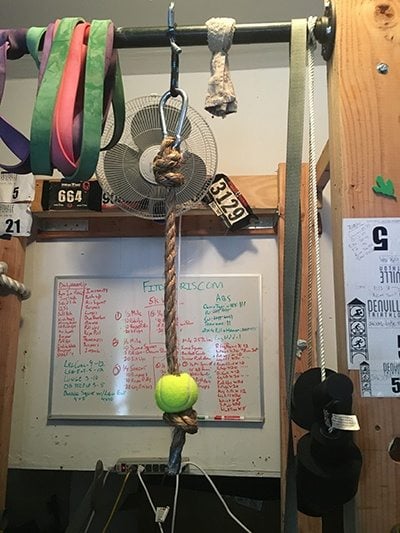 Hey wanted to post a quick picture of a rope hang I just made to help with defeating the Spartan RIG which I failed this past weekend at the Vermont Beast! lol

You will sometimes see just the rope with a knot at the bottom or a baseball above the knot.

I was trying to figure out how to make my own. I could have went with a baseball, but I had a few tennis balls laying around. I grabbed some 1/2 inch rope from home depot.

I also used a heavy duty carabiner that I was hoping I could just clip onto my pull up bar, but it was not big enough. So what I did was took 2 pieces of climbing rope I had laying around tied that around the bar and can now hook the caribiner on that. Not bad and it works well and more importantly it holds me!

So I drilled a nice hole into the tennis ball. BE CAREFUL! I did not realize they are pressurized… nice POP once you break it open 😉

I jammed the rope through it. Be sure to tape the end of the rope first with some duct tape to make it easier to pass and not get un-frayed.

Once it was all set up I did some hangs and the tennis ball just crumpled up… so I basically cut a hole in the side leaving one side uncut so it was like a flap. I mixed up some mortar concrete mix and filled those bad boys up. Pushed down the flap and let them cure over night.

They work great, are real solid, and def help with the grip strength! Just need to pass the rig next month.

Hope it gives you some ideas.

Clock hits 2 or 3 O'click-ish... you go for that cup of coffee and afternoon snack that probably consists of some sort of bar, pastry, or other crunchy goodness. You rock out with some sugar in the coffee and probably that flavored creamer the lady from upstairs brought in!! Nom nom nom.. sure it tastes good, but c'mon is it really good for you? ...