From The ARCHIVES 7/24/2012: This is an old post from the very early days of when I started! I use it for reference of what I was doing right and more so WRONG, but also as motivation to see how far I have come. I will try to add in updates as I go over these, but I hope you might get something out of them! 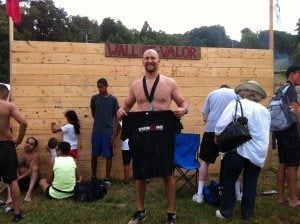 WOW!! That is the first thing I can say about the Super Spartan!

Also have some pics of all of us at the bottom!

Below I am going to try and write out my whole experience of the race. I will try to answer some questions I had going in and talking about obstacles etc… I might get a bit all over and I am sorry if I do, but the race was long and I forget a lot of it.

My buddy Ken came up Friday night so we could get a jump start on the day and get up to Mountain Creek for the 9AM heat.

The first water station had water and brownie bars or something that we did not grab. The second station where we took our GU gels just had water. The third water station had water and some gritty Gatorade which was good. I wish I had one more GU pack, but I did not. After the 3rd series of wall obstacles I could feel my stomach getting HUNGRY!! Then out of nowhere and the rope net climb, some dude was like “anyone want a GU pack I have like 5 extra!” I grabbed one so fast and chowed down. It was some chocolate pudding and was the greatest thing I have ever tasted lol. It def helped me get through the rest of the race! After the race you are welcome to help yourself to all the sponsored goodies and a banana which I pretty much took all in then felt like I was going to yack 5 minutes later! Anyways back to the race. That was just a Hodge podge of how nutrition went for the day.

Other than that I had a change of clothes in the car and a plastic bag for all the muddy gear I was going to bring home. Oh yeah don’t forget another pair of shoes like I did. Had to drive home barefoot

The Start of the Super Spartan!

Waiting at the starting line was pretty intense since you had to sit there and wait and stare up at this huge mountain that you were about to climb up first thing! Ugh hills duh. Glad I had done those few mile sessions in on the stairs The race kicks off and we start running up the hill. Oh hey there is a copper head sneak!! WTH lol. Well… most people did a light run as long as they could, then like most of the race it turned into a hike up and down the hills which was killer on the legs. In fact when you hit level ground or ground with a slight grade it felt so easy to run on. Like I said the race was long so I am going to try and go through the obstacles in the order I can remember. I really don’t know how long each hill was or the trail running etc… and I hope The Spartan Race might post the actual course on the site so we shall see.

Anyways here is the best I can recollect of the race course. If you have any notes to add please add them in the comments below. Seems like every time I go over it I remember some other obstacle! Lol

“Warning – Some obstacles I am just making up names ”

Swimming Under Canoes & Onto a Floating Dock

After the mud pits there seemed like what had to be a few miles of trail running. I have to say I felt really good running, so mentally that was a boost. This is where the C4 started kicking in too

Hobie Hopps? “ I think they are called this”

Water Station – This was the 3rd water station and they had water and some gritty Gatorade which I think helped. Who knows, but it was better than water. I had one cup of Gatorade and 1 cup of water.

OK so after the tire flip it was back up the hill then over to a nightmare of a rock hill. This was not an obstacle, just part of the course, but it was insane. It was just rocks up and up an up. People were yelling out… watch out! Rock falling lol. There were a few times I had to sit down and take a good 30 second break. I am not even sure how long it took me to get up that hill, but this is where the gap between Ken and I started to grow. Also I remember just looking down not only at the rocks, but at other times thinking about all the plants I was crawling through just thinking about poisons something. Well today some bumps are popping up on my arms so we shall see how that goes!

After another little run we came to the next obstacle.

Final Water Station – There was a final water station there where I actually ran into a guy I played BBall at home with. They only had water. At this point my stomach was starting to feel empty. I knew that wasn’t good and was not sure what I had left in me. I felt tired, but I was not totally drained and knew I had more left in me. 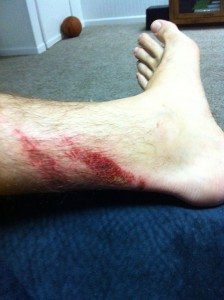 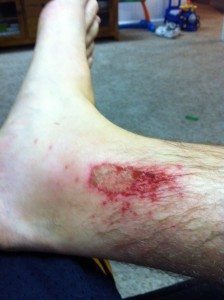 The END is NEAR!!

After that it was a downhill jog to the bottom for the last obstacles to finish the race! 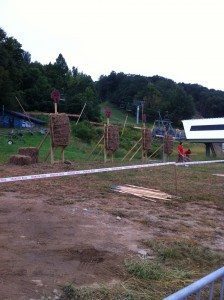 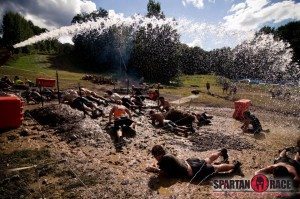 It was an awesome experience and was great to see Ken and Mike at the finish. It was also good to see Bill finish up as well. He didn’t even train!! Crazy man, but he did it. Craig finished up as well and we started packing it up. Mike would later find out his ankle was broke. We get em next year bro!!

We showered off at the hosing station and hobbled to the car. The soreness was setting in. We started our drive, got some food and got home! I was ridiculously hungry that night and the next day! I ate what I wanted lol

As of today, Monday I am still pretty sore, but my ankles are really what is bothering me. Pretty much anything I do hurts with them, so I will have to wait and see how they heal up. I am going to take the next few days off and see how I feel before I start up again. I will go for a massage tomorrow or Wednesday as well

What to train for next

Here are some pics of us at the event. Maybe next time I'll carry my water proof handheld.

Spartan Race? What am I thinking….

From The ARCHIVES 7/2012: This is an old post from the very early days of when I started! I use it for reference of what I was doing right and more so WRONG, but also as motivation to see how far I have come. I will try to add in updates as I go over these, but I hope you might get something out of them! Well the last time I wrote a post was August ...