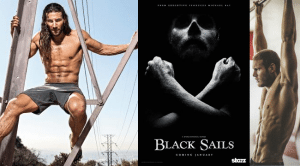 OK not sure if you have seen the new show on Starz called Black Sails? It is a pretty intense show and there is only one episode left!

Well before I even knew about the show I had read in Muscle & Fitness about Zack McGowan and his crazy workout schedule. This guys workout is nuts and he has the physique to prove it! I also noticed on the show Tom Hopper who plays or should I say played 🙁 Billy Bones had some huge guns! I then saw a short interview with him in Mens Health magazine.

At the end of the day there is no “Specific” Black Sails workout, but the guys have some of their own crazy regimens. They were put through some awesome training and focused on heavy lifting and metabolic circuits.

Tip: I have not attempted this lol, I would love to be able to bust this out someday!

This was a great WOD!

I was able to get 5 rounds in. During the 3 round I really hit a wall and had to slow down and pull ups go real tough! I need to take a bit of my own medicine and get my pull up strength back up! Lear more about that here https://fitdadchris.com/blog/increase-pull-numbers/

Always do a warm up and stretching…

Here is my video showing how to do some of the above moves.. Enjoy

Tips for Lifting in Your Forties

Actor, director and model, Norman Mark Reedus is most famously known for his portrayal of Daryl Dixon in the famous TV show The Walking Dead. In the past, Norman Reedus played various other hit roles such as Murphy McManus in the movie The Boondock Saints and its sequel. Norman Mark Reedus has also worked with top fashion designers as a leading model ...